Home > Who we are > Meet the team > Bobby Child 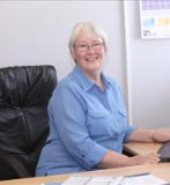 Bobby Child’s appointment as a Trustee preserves the link with the very beginnings of the charity.  The Rotary KidsOut Day was the idea of Kingston upon Thames Rotarians Peter Jarvis and Bobby’s husband, Graham; they, together with their fellow members, organised the first event, and subsequently “sold” the idea to hundreds of other Rotary Clubs up and down the country.  The continuation of that idea, and the development into KidsOut the charity gave the founders immense pride, and Bobby is delighted to now be an official part of it.

She has two sons, both of whom have volunteered to be Ambassadors for KidsOut, and seven grandchildren.  She is an Honorary Life Member of Kingston Rotary Club, a member of Kingston Inner Wheel Club, a Trustee of local  charity Kingston Nursing Association, as well as being on the Management Committee of her local Cricket Club and of the Committee which runs her home town, New Malden’s annual Community event.  She continues to work as an experienced paralegal for Kingston Solicitors, Palmers, in their Private Client Department.

The celebration of the 25th anniversary in 2015 of the first KidsOut National Day Out is a particular source of satisfaction for Bobby, her family and friends, as despite the loss of both Peter Jarvis and Graham Child, that good idea has not only blossomed but continues to bloom.