KidsOut were lucky enough to return to The Abbey for our annual Golf Classic event, raising over £3,000 for the charity’s work in supporting disadvantaged children in the Midlands and the Northeast. 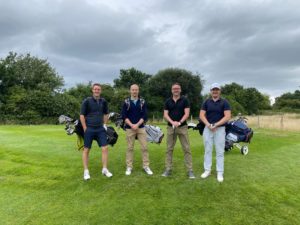 Taking place on Wednesday 11th August  at The Abbey, Redditch, guests were treated bacon and egg rolls on arrival followed by a generous rolling BBQ including classics like hot dogs, burgers, potato salad, ribs, chicken and more, to  satisfy appetites ahead of an auction.

Guests attended the event from far and wide, and along with the usual golfing challenges such as closest to the pin on 6th and longest drive on 12th, guests could participate in the ‘On The Green’ on 10th where individuals would compete to get their golf ball on the green and if successful would be in the chance to win a cash prize, and ‘Guess the total numbers of balls lost’. All lucky winners got to take home a bottle of champagne.

The day provided a great setting to spend time with colleagues, potential clients, and social acquaintances after what has been a difficult year for everybody. Stewart Moulds, Director of Fundraising, had to say about the event ‘A big thank you to our Birmingham and Manchester Committee members who secured teams and helped on the day. The atmosphere was fantastic and we raised a great amount of money. Thank you to The Abbey for hosting another KidsOut Golf Classic .”

The whole team at KidsOut would like to reiterate our thanks to all involved. A special thanks is warranted to the Kevin Hindley and Peter Barkley from the Manchester Committee, and Tom McCarthy from the Birmingham Committee for their dedication and commitment in making this a success. We’d like to thank The Abbey for hosting the spectacular day. 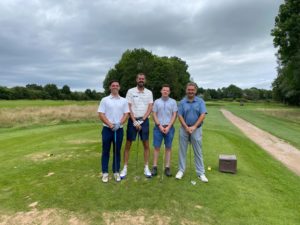 Check out the photos here!