The John Evans KidsOut Ball was held at the Grand Ballroom, The London Hilton on Park Lane, 5th June 2013. On arrival guests were greeted by James Bond, a Daniel Craig lookalike, complete with Aston Martin.

During a superb four course dinner, actress and impressionist, Debra Stephenson entertained and hosted with a range of hilarious impressions throughout the night.

A very happy guest commented ‘The entertainment was fantastic, and the atmosphere, dancing and casino were fabulous. We haven’t stopped talking about the event.” 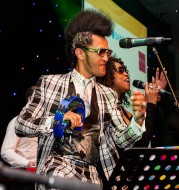 There was a surprise when a Tom Jones impersonator hit the stage with ‘It’s not unusual’ followed by the Earthlights Boogie Band which got everyone dancing.

Matrix Fitness Racing Academy was there on the night and donated Olympic champion cyclist, Dani King’s road bike from the 2012 season. Over £2,000 was raised from the auction. Dani commented that she is ‘very proud we’ve helped this great charity’.

All at the John Evans KidsOut Ball were especially pleased to have a very special guest attend, none other than Dame Kelly Holmes. During the evening sports artist, Ben Mosley, could be seen producing a ‘Live’ painting of Dame Kelly Holmes, which was then auctioned and kindly signed and presented by the star.

Hundreds stood up and made a pledge to give a disadvantaged child a magical day out. Funds raised at the John Evans KidsOut Ball will help develop all of our children’s services.

Special thanks to Chairman of the KidsOut ball Sue O’Brien, Stephanie Alexander, The Ball committee, Chair of KidsOut, Helen Pitcher and all our supporters for making the night the event the success it was.