Spongebob and Friends at the Armed Forces Day! 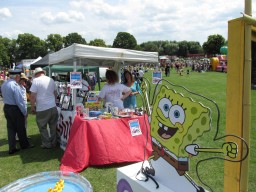 KidsOut raised over £180 at this year’s Armed Forces Day in Leighton Buzzard.

Armed Forces Day is a local event that commemorates soldiers and ex-servicemen to mark the anniversary of the First World War. The day offered something for everyone with a police dog display, a marching drill by the ATC cadets, a bandstand performance by the RAF Halton Band, and children’s entertainment. KidsOut offered their own Nickelodeon games including crazy mirrors and buzz wire games. Hook a Duck proved very popular with the children along with the signed football and aircraft prints that also sold well.

KidsOut are already looking forward to the next local event, the Carnival at Parsons Close Recreation ground and the Canal Festival at Tiddenfoot Waterside Park. We look forward to seeing you all there!

A great day was had by all and we would like to thank Nickelodeon for providing the games.