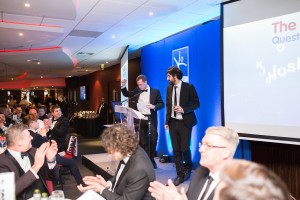 KidsOut is delighted that the 2017 Southampton Question of Sport more than doubled last year’s total, with £75,000 raised! More than 450 guests from local businesses, including the evening’s main sponsor Moore Blatch, gathered on 10th March to enjoy the black-tie dinner hosted by comedian and novelist Mark Watson.

At the beginning of the evening, mother from a local refuge spoke about her personal experiences, and how KidsOut has supported her and her children, which led to £7,561 being pledged to take similar disadvantaged children in the area out on Fun Days.

The Southampton Regional Chair, Josh Slater of Barratt Homes, ensured the evening focused on fun and fundraising, with plenty of time for networking and the chance to win fantastic auction prizes. 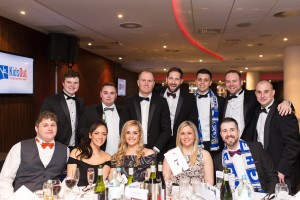 Main auction highlights included tickets to see Adele with an overnight stay in London, which sold for a fantastic £2,000; an Ascot Horse racing day and champagne meal for 10, selling for £5,000 and VIP Monaco Experience and hotel for 4 which sold for a phenomenal £7,700! 30 guests pledged to take part in the Winchester Half Marathon later in the year and raise sponsorship for KidsOut.

The evening also featured a special surprise. Several members of the committee and other KidsOut supporters/guests had been working on a special surprise video that was played during the evening. Mike Mayock of Mackoy Ltd, Ian Sneddon and Richard Langton of Barratt David Wilson Homes, Marc Winteridge of Quayside Electrical and Ricky Jenkins of KA Watts undertook a diving competition under the expert guidance of Peter Waterfield, Olympic Silver medalist diver and previous diving partner of Tom Daley. The two parts of the video, produced by Cass Productions, were a particular highlight of the evening and can be viewed here. 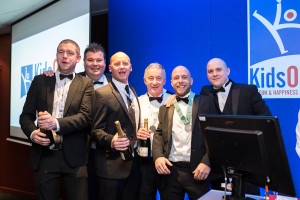 After battling it out through two rounds of Question of Sport quiz questions, the Barratt Homes 2 table were crowned the eventual winners, playing as Everton, with Torc24 topping the Europa league as Coventry City. Congratulations to both teams!

KidsOut would like to extend a massive thank you to Josh Slater, and congratulate him on his first event as Chair! Thanks also to the rest of the committee, Moore Blatch and all who attended, donated, pledged to run the half-marathon or supported in any other ways. The money raised at the event will be all be used to provide fun and positive experiences to disadvantaged children in the Southampton area.