KidsOut will be joining the likes of Swansea FC, Birmingham City FC, and Glasgow Rangers FC on a weeklong social media blackout. In doing this, we hope that we can help raise awareness of online abuse and continue to protect the mental welfare of children escaping domestic violence.

Online abuse through social media outlets has been a talking point for many years with next to nothing or little action being taken upon the users spreading hate. KidsOut is supporting the idea for basic verification of users as part of the signup process which will help towards holding users accountable for their words and actions.

“KidsOut strongly supports the stance of footballers and their clubs in calling for social media companies to do more for online abuse. We will be joining their weeklong social media blackout.

As a National Children’s Charity dealing with children who have suffered domestic violence, we are well aware of many examples of social media being used by children to bully other children. The impact on the mental health and welfare of the victims of online bullying is well documented. For this reason, we are supporting the call for the basic verification of users, as part of the sign-up process, to any social media platform, which will ensure that users are both identifiable and accountable for their actions and words. If they don’t we also believe it is time for the Government to step in and legislate change so social media platforms begin working proactively in the interests of wider society.

Along with online bullying and daily racists attacks on players and individuals, this is only part of the problem, other issues lie with the toxic and misleading content social media platforms fail to acknowledge. The impact this can have on a young person’s mental health is devastating with many suffering from low self-esteem, depression, anxiety, and sleep deprivation.

KidsOut hopes that all children’s charities will join this campaign and stand in solidarity with Swansea FC, Birmingham City FC & Glasgow Rangers FC, and encourage others to hold online abusers accountable. Twitter, Facebook and Instagram’s lack of corporate social responsibility in this area, driven by their bottom line, will only change through a National concerted effort. Asking that users of their platforms are able to be identified and held accountable for their words is little in comparison with the positive effect it would potentially have. It may not stop the abuse, but it will significantly reduce it and be a major first step.”

KidsOut would like to thank their supporters for their understanding of this matter. 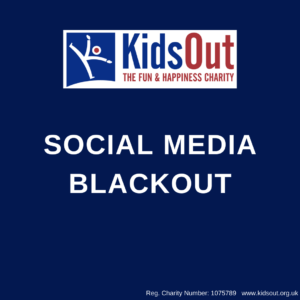