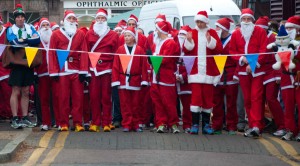 The 1st December saw over 100 adults and children running through the streets of Leighton Buzzard dressed as Santa Clause, all in aid of KidsOut. The number of people running (or walking) more than doubled compared to last year’s annual Santa Dash.

The race was slightly shortened due to the icy conditions on the day and the number of young ones competing. All participants were greeted by the real Santa Clause at the end of the race and awarded a finishers medal.

The event was organised by the Leighton Fun Runners and thanks to them over £800 was raised which will go towards KidsOut’s 5 children’s services that supports young people across the country. If you were inspired by the run and would like to find out more about the Fun Runners click here for more information.

After their run everyone was welcomed to the Golden Bell for mince pies and mulled wine. KidsOut Chief Executive, Gordon Moulds, presented the Landlords of the Golden Bell a certificate to recognise them for being the best pub fundraisers in Leighton Buzzard. A Special thanks to the Golden Bell and the Fun Runners for making such a valuable difference to the charity.