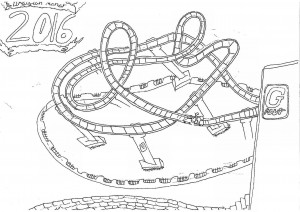 Birmingham has been announced as the winner of this year’s KidsOut Picture Competition, winning enough cinema tickets for the school’s 177 pupils.

Woodlands is a school for pupils aged 2 – 19 with a broad spectrum of special needs, and has attended the day out at Drayton Manor Park for many years.

“It is the highlight of the school calendar for our secondary pupils” said Laura Hyatt, Woodlands Deputy Head. “Every time we have been, we have been overwhelmed by the generosity of all who fund this event which gives our pupils a day of pure fun and enjoyment.”

KidsOut works in partnership with over 600 Rotary Clubs across the UK to make the national day out happen on the second Wednesday of June every year. 2016 has been a record year with over 29,000 children in attendance at 145 venues, taking the total number of children enjoying the day out to 580,000 since 2007. After the day out, children are invited to draw a picture of their day for the competition, with the shortlist then narrowed down by voting on social media.

Drawn by Kieran Plummer, 16, the winning picture shows the G Force ride at Drayton Manor Theme Park in intricate detail. Kieran’s drawing has enabled Woodlands to receive enough Odeon cinema tickets for the whole school to enjoy a visit to the cinema.

“We are delighted with our prize of cinema tickets for the whole school. Many of our pupils do not get the opportunity to enjoy cinema visits outside of school, so this will mean they can all have the enjoyment of watching a film with their school friends” said Laura. “Kieran is one of our most talented and enthusiastic artists. He keeps his drawings in a binder and proudly shares them with his friends. Hoping one day to work as a tattoo artist, Kieran sketches designs and ideas for future reference. Winning this prize has been a huge accolade for him, as well as for Woodlands School.”

Kieran’s picture was chosen as winner from the shortlist by Steve Cartwright, Rotary KidsOut National Coordinator. Steve said: “The winning picture for me typifies what the National Rotary KidsOut Day means to a child, and represents a flavour of the many thank-you letters and pictures sent by children and schools every year following their day out. The amount of detail in the picture underlines the enjoyment, excitement which serves to inspire us to ensure we continue with the National Rotary KidsOut Day. Let’s have another record breaking year in 2017!”

The success of the National Rotary KidsOut Day would not be possible without the help and support from the management and staff at the various venues, including Drayton Manor who this year closed the park to the public for the day and welcomed 5,000 children. KidsOut would like to extend a huge thank you to all the Rotary Clubs, volunteers and venues who make the day a success each year.