Over 200 participants in Santa Dash

“It was a fantastic opportunity to do something as a family, and great to see so many children running,” said Theresa Keete, a member of the Leighton Buzzard Athletics Club. “The atmosphere was good, and we all enjoyed it.”

Raising well over £1,000, the KidsOut 2015 Santa Dash was a resounding success. Attracting 205 participants, the fun run was KidsOut’s biggest yet, beating last year’s record by 25 people. Everyone finished the race in good time and received a medal, and cadet groups from Watford, Flitwick, Dunstable and Leighton Buzzard also participated, holding their own competitions among themselves.

In addition to the Santa Dash, the KidsOut Santa’s Grotto hosted nearly 200 visitors on the Friday and Saturday, though was unfortunately cancelled on Sunday due to poor weather. “I have a special scoop from Santa himself,” said Stewart Moulds, KidsOut Head of Fundraising who worked with Father Christmas in the Grotto. “He was so impressed with how polite and well-behaved all the children were when they met him, so he’s going to come to Leighton Buzzard first this year to drop off presents.” 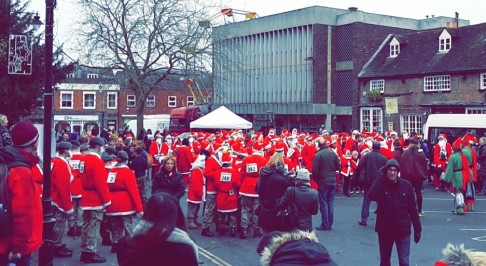