Home > KidsOut News > Most Ever Raised for a Glasgow Event!

Most Ever Raised for a Glasgow Event!

The Glasgow business community raised over £53,000 at the KidsOut Question of Sport event on Wednesday 26th November. This is the most money ever raised at the Glasgow event, which has enabled fun and happy experiences for disadvantaged children in Scotland. 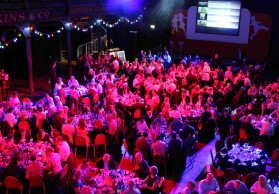 A jaw-dropping individual donation of £10,000 was made on the night helping to achieve the phenomenal sum raised. The Question of Sport quiz proved highly competitive with Walters Holland playing as Everton FC who took the grand trophy.

KidsOut would like to thank all event committee members and guests for making the occasion the success it was.

Download your picture with the UEFA Europa League Trophy here.

View pictures from the event here.