Over 500 people from Midlands based companies joined KidsOut at the ICC for a night of fun and fundraising at the annual KidsOut Midlands Question of Sport Gala Dinner on Wednesday 6th September. Continuing last year’s creative twist on the traditional ‘QoS’ menu, the committee this year opted for a Mexican Banquet meal, meaning after the guests were greeted with a string quartet and champagne reception they were then treated to Spanish Guitar from musician Felix Askew-Conti once inside the main dining hall.

Each year KidsOut offer awards to 4 people or companies for outstanding support and contributions to the charity.  This year not one but two of these awards were presented to the Midlands committee.  Rick Smyth was presented a personal achievement award, to thank him for the ‘out of the box’ thinking and ideas that brought KidsOut the Giving Tree initiative.  Last year KidsOut were able to offer 10,000 children a gift over the festive period who ordinarily would have received nothing at Christmas.  This would not have been possible at all without Rick’s fantastic idea 4 years ago to offer companies the chance to ‘ditch secret santa’ and purchase toys for disadvantaged children instead.

KidsOut reserve another of their special awards each year for companies who have done something incredible for the charity that has had a significant impact on the way KidsOut can make kids happy.  Last year this was awarded to Drayton Manor and its CEO Colin Bryan, as a token of the charity’s appreciation for closing the park to the public, meaning that KidsOut children had exclusive access to the park for the day.  This year an exception was made, and the company award was presented to the KidsOut Midlands committee; due to their continued hard work and effort KidsOut now have their largest charitable output in the Midlands area.  This is down to the drive, enthusiasm and passion for the charity that we have in the Midlands area, and KidsOut cannot thank the committee enough for their continued dedication.

In addition to the main quiz, guests could also take part in a raffle, auction and silent auction.  There were some fantastic prizes available in the silent auction, including a tour of the Red Bull Racing Factory, singed Lionel Messi Barcelona shirt, and a champagne tasting session for 16 people.  Available in the main auction were holidays to a French Hunting lodge, a Spanish villa and a ski chalet, as well as an original Picasso print.

Topping the champion’s league and winning the quiz were Allied Irish Bank.  Congratulations!

KidsOut would like to say a huge thank you to the event committee, as the Question of Sport would not be possible without their help and support.  In particular thank you to Sara Williams and Rick Smyth, co-chairs of the committee.  The money raised at this event will be used as vital funds to continue to supply Fun Days and Toy Boxes to disadvantaged children in the midlands area, helping KidsOut to bring fun and happiness to disadvantaged children throughout the UK.

The date of the next KidsOut Midlands Question of Sport is to be confirmed, so keep an eye out on our social media channels for the announcement! 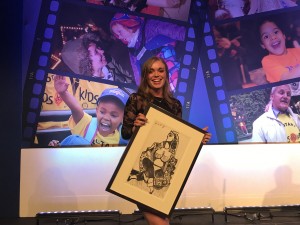