The London Question of Sport at the Lancaster, London on 3rd April raised over £40,000, thanks to the outstanding generosity of the guests. 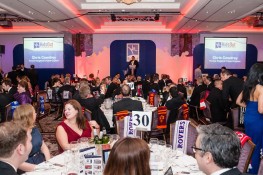 There was an impressive start to the night with Daniel Reed, a talented magician, performing during the reception as guests networked over a glass of wine. To host the event for the first time, guests saw former English Cricketer, Chris Cowdrey, with his superb presenting skills throughout the night. A special guest appearance was made by Shazia, a mum who KidsOut has helped through the Toy Box and Fun Day services, and her refuge worker Keeley, providing an insight into how KidsOut helps mums and their children.

The Question of Sport quiz was highly competitive with Fin8 Limited taking the trophy as London Question of Sport winners. The auction helped to raise a staggering amount, with Golf Clubs made from the propellers of the Queen Elizabeth 2 selling for £3000, and Ben Mosley artwork for £4100.

KidsOut would like to thank the chairman, Neil Smith and the rest of committee for their continued effort.