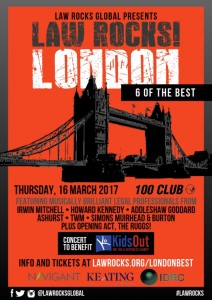 On 16th March 2017, KidsOut attended the fantastic ‘Law Rocks! London: 6 of the Best‘ event at the historic venue the 100 Club.

Founded in 2009 by KidsOut’s very own Ambassador Nick Child, Law Rocks started in London but is now an international event, taking place throughout each year in Los Angeles, San Francisco, Hong Kong and Singapore. Law Rocks has raised over £2.5m for charities since its launch.

The Law Rocks mission is to promote music education for underprivileged youth and raise funds for local nonprofit organizations by combining the power of music and the generosity of the global legal community. They accomplish this mission through epic ‘battle of the band’ fundraising concerts in cities across the globe that star legal professionals-turned-rock stars.

Nick Child, who also sits on the KidsOut London Question of Sport Committee and whose father, Rotarian Graham Child, started KidsOut through the National Rotary KidsOut Day in 1990, said: “Our goal is to raise money for those less fortunate than ourselves, while giving the legal industry the chance to realize their potential as rock stars!”

Each Law Rocks concert is a memorable event where legal professionals can let their hair down and have a blast. At the end of the night the winning band is selected by three factors – total fundraising, audience favorite, and total score from a Rock Panel of judges. 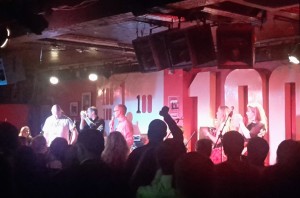 The evening featured a raffle in aid of KidsOut, and KidsOut CEO Gordon Moulds spoke for a few minutes about where the money would be going. For every £20 donated, KidsOut will take one child in a London refuge on a Fun Day out.

KidsOut would like to say a massive thank you to Law Rocks who expect to have raised close to £10,000 at this event! Thanks in particular to Nick Child and Damian Hickman for supporting KidsOut, and all the sponsors and attendees.