The KidsOut Summer Ball raised over £139,000 on Thursday 22nd June 2017, to help the charity continue to provide fun & happiness to disadvantaged children!  Every penny raised at the Summer Ball will be spent on children in the London area.

Nearly 500 people attended the black tie evening at the Royal Lancaster Hotel, which was hosted by comedian and presenter Dominic Holland, with Edward Rising acting as our expert auctioneer later in the evening.

Helen Pitcher OBE, chairman of the charity, delivered a wonderful speech about the 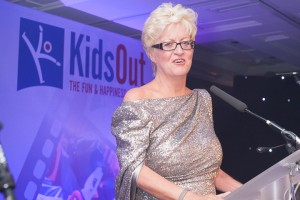 children that KidsOut support, and encouraged guests to continue their support for the charity through volunteering or signing up to the KidsOut Loyalty Scheme, in addition to thanking the committee for their fantastic support.  Pavita Cooper, chair of the Summer Ball committee, also spoke to the audience about the charity and the work they do.  Pavita was presented with a Jéroboam of champagne generously paid for by KidsOut staff, to thank her for such hard work in putting the event together.

We had some stunning performances from various musicians and groups throughout the night.  Firstly before the dinner was served, guests were treated to a superb performance by Hackney City Academy Children’s Choir.  The children performed 4 songs, including hits Shackles by Mary Mary, and Higher and Higher by Jackie Wilson.  They created a fantastic party atmosphere which set the tone for the evening!  Musician Tim Cronin provided some 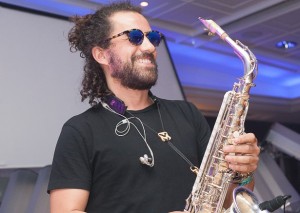 mellow background music throughout the dinner itself, by singing and playing guitar and keyboard, demonstrating some impressive skills with a loop pedal! Finally seeing off the evening with some stunning dance music was visual DJ Drumming artists, Afishal.  Their setup alone is a sight to behold, and their playing went down a storm with all the guests who danced the night away once the dinner was over!

The Main Auction featured 5 ‘money can’t buy’ items.  Artist Ben Mosely created a masterpiece live throughout the night, which was then sold in the main auction for £8000! A week at a South African Game Reserve and a Salvador Dali painting were also won in the main auction.  Following the main auction, there was a higher and lower game, in which one lucky winner went home with a diamond worth £1000!  34 people also volunteered to run the Royal Parks Half Marathon in October in aid of KidsOut, and pledged to raise at least £300 each! 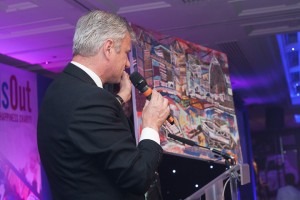 There was additionally a Silent Auction ongoing throughout the night, with some incredible prizes, from signed Emma Bunton platform boots to VIP tickets to gigs and TV shows and Club Wembley seats to a World Cup qualifier! The Silent Auction made a brilliant total of over £38,000 for the charity!

KidsOut would like to offer their heartfelt thanks to the Summer Ball committee.  Without their hard work and dedication, the event really would not have been possible.  Particular thanks to Pavita Cooper who helped the charity through an incredibly difficult time by pulling the event together. The money raised at this event will be used as vital funds to supply FunDays and ToyBoxes in the local area, helping KidsOut to bring Fun and Happiness to disadvantaged children all over the United Kingdom.

The next KidsOut Summer Ball will be held at the Royal Lancaster Hotel in London next June.  Keep your eyes peeled for updates!

Finally, thank you as always to our fantastic event photographer Paul Douglas, for his beautiful photographs of the evening.