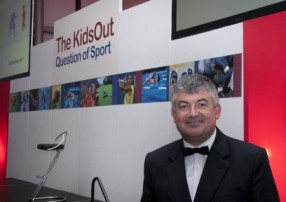 The KidsOut Question of Sport Manchester event was a huge success. Held at Lancashire County Cricket Club over 400 business men and women attended a superb evening of corporate entertainment and networking, raising a superb £30,000 for KidsOut.

The evening started with a champagne reception in the Mezzanine Bar where guests were treated to live music. Attendees could also observe the superb range of auction prizes which included a ‘2 night break to Marrakesh’ and ‘Two VIP tickets to a Ricky Hatton boxing match’ amongst others.

Running throughout the evening was a fully interactive sports quiz which is based on the popular TV show ‘A Question of Sport’. Rounds included ‘What Happened Next’ and ‘Guess the Mystery Sportsperson’. Guest could also purchase a games package to enter yet more themed games which included ‘Higher of Lower and Russian Roulette’. A four course meal with wine was served throughout the evening.

John Parrott, who is now a Patron of KidsOut attended the evening. John gave a speech to the audience and pledged to further support the work of KidsOut. John donated an additional auction prize at the end of evening – ‘A fourball with John Parrott and Formby Golf Club’ which alone raised over £1000 for KidsOut.

If you are interested in the KidsOut Question of Sport events which take place at various locations all over the UK, you can find more in the ‘Corporate Networking Events’ section of the KidsOut website.