A KidsOut Fun Day at RetroPlay!

On Sunday 8th September, KidsOut provided the opportunity for 19 children and 12 adults 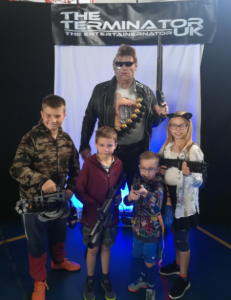 to attend RetroPlay: a movie, comic, and gaming family fun-day festival based in Leighton Buzzard.

Groups supported by the charity had the chance to meet a whole range well-known movie characters and superheroes, as well as this year’s special guests Sandi & Sandra, stars of the hit TV show Gogglebox! The venue also exhibited over ten vehicles from famous media franchises such as the Ecto1 from Ghostbusters, the Delorean from Back to the Future, KITT from Knightrider, the Trotter van from Only Fools and Horses, and many more including the Optimus Prime truck from Transformers!

KidsOut hosted a silent auction, where prizes included a collectible fleece from the British staple Bargain Hunt and a remote control helicopter! The charity also ran a tombola, which was thoroughly enjoyed by the children. 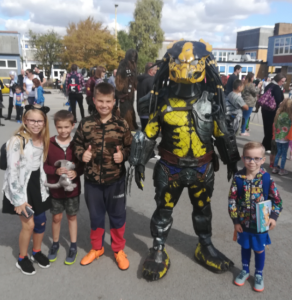 Feedback from the day was overwhelmingly positive, with all the children supported by KidsOut having a great time at the festival. One child told the team they thought the day out was “absolutely brilliant!”, while a mother added that Fun Days such as Retroplay are great for “socialisation, coping in crowds, and experiencing new activities.”

KidsOut would like to thank the RetroPlay team for organising an incredible festival and providing KidsOut with tickets for the day. The charity looks forward to future collaborations with RetroPlay and appreciate all the effort that the team put into making it such a fabulous event.