Buy Your Tickets for the KidsOut Comedy Night with Justin Moorehouse!

KidsOut is thrilled to announce an exclusive comedy night with the fantastic comedian Justin Moorehouse! The evening is in benefit of KidsOut, with profits aiding the charity’s work in bringing fun and happiness to some of the UK’s most disadvantaged children.

Tickets are only £20 (plus booking fees), with the event being held at the London restaurant Pucci Mayfair. There are limited seats available so be sure to book now to avoid disappointment!

Justin is a comedian, actor, writer and radio presenter, probably best known for his role in the hit show Phoenix Nights. Justin won Celebrity Mastermind on the 30th December 2011 on BBC1 his chosen subject was Les Dawson. Justin is is a vegetarian, dog owner, father of two and he likes Batman quite a bit. Justin has starred in a couple of pantomimes and more has done theatrically also starring in two very lovely plays at the Royal Exchange in Manchester. Justin is a writer and appears in the Radio 4 sitcom called Everyone Quite Likes Justin.

KidsOut is a charity (Reg. no. 1075789) that provides positive opportunities and experiences to enhance the wellbeing and outlook of disadvantaged children, supporting them in becoming well-integrated members of society. Established in 1999, KidsOut has a small team of staff while utilising thousands of volunteers around the UK to achieve its core mission: to bring fun and happiness to those children who need it most. Although based in Bedfordshire, KidsOut provides its services all over the UK to over 50,000 children a year, mainly through the provision of fun days out and Toy Boxes for children being rehomed after refuge. 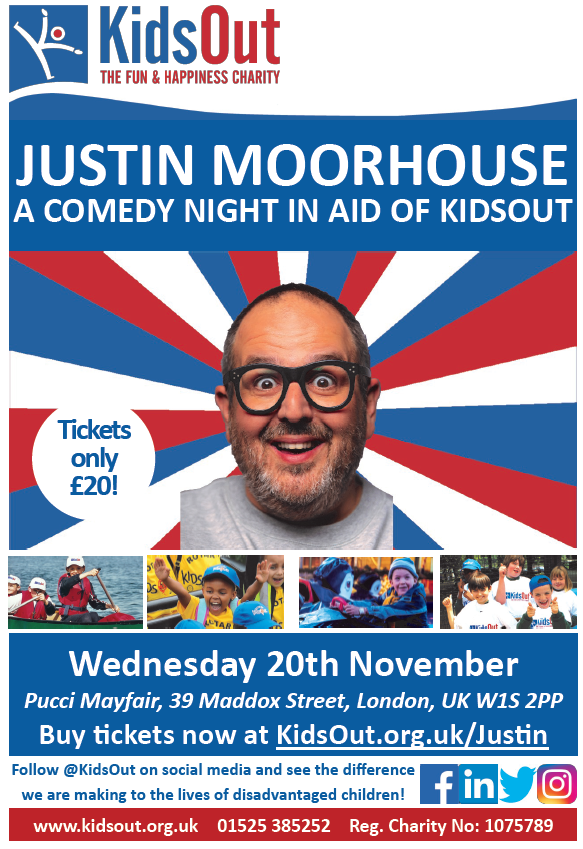