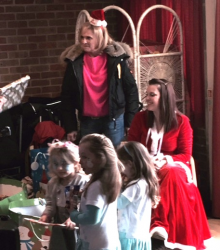 Thanks to the support of Laura Allen of 5G Comms and Martin Sheehy of the Rotary Club of Cookham Bridge, KidsOut were able to put on a fantastic Christmas Party for 55 children and their mums from Wycombe refuge and outreach, Chesham refuge, Aylesbury and Luton refuges. There was plenty of disco dancing and games, a Santa’s grotto, a buffet lunch, face painter, a nail technician for mums to have a manicure and Mother Christmas giving presents that had been collected through the Giving Tree Initiative by 5G Comms.

The atmosphere was fantastic and feedback from the day was brilliant;

A mum told staff that the reason the day was so special was because it meant she could see her teenage son as he is not allowed to stay in refuge or visit her and his younger brother. The opportunity to spend time together for families who have been separated – in such a friendly and welcoming environment is one not to be underestimated.

A mum and her 2 girls, when they visited Mother Christmas and received their presents – asked if their mummy could have a present too as ‘she never gets presents from anyone’ – Mother Christmas  had a small gift with her which was a ‘box of happiness’, she then gave to mum and made the children happy – as mum was happy.