Now that the buzz of Christmas is sadly over, it is time to reflect on the phenomenal success of the 2017 Giving Tree. A record breaking number of over 400 companies took part in this year’s toy appeal, with businesses and individuals from all corners of the UK signing up to ‘ditch Secret Santa’ and donate brand new gifts to disadvantaged children instead. 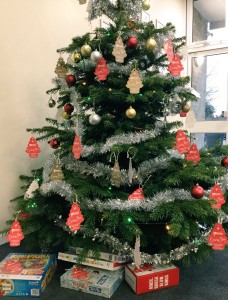 The overwhelming generosity of these people has allowed us to distribute brand new toys to every child in refuge over the Christmas period. No child should have to wake up on Christmas day without a present to unwrap and play with, and even receiving such a simple present such as a cuddly toy, book or board game will have made such a different to these children and their families.

Alongside the donation of tens of thousands of toys, an impressive £8,000 was raised solely through Giving Tree text tags. These tags were designed for individuals that wanted to get involved in the initiative but were unable to actively buy the toy themselves and would therefore instead text in a donation that would be used by KidsOut to purchase a brand new toy on the donor’s behalf. With this impressive figure, over 1,000 additional toys can be purchased for disadvantaged children over the festive period.

KidsOut would like to particularly thank the following companies who allowed us to use their space as collection points: 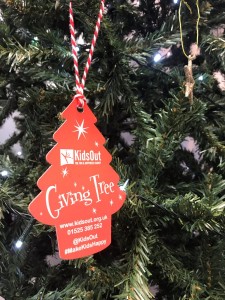 These collection points were vital to the running of the initiative, allowing us to receive toys from companies far and wide. We would also like to thank Arsenal Football Club with their continuing support of the Giving Tree and their prominent influence of the scheme. Additionally, it is important we make a big thank you to every company and individual who got involved in the 2017 Giving Tree by donating toys and presents. Without their generous donations and giving nature none of this would have been possible.

Finally, we would like to say a special thank you to all the volunteers who contributed their time and effort into making the 2017 Giving Tree happen. From driving vans to sorting toys, the 2017 Giving Tree would not have been so successful without the help of these dedicated helpers.  If you would like to find out more about the Giving Tree, or if you didn’t get the chance to take part this year and would like to take part in the future please email info@kidsout.org.uk and we’ll let you know all the details you need!