Fantastic Night of Fundraising at the KidsOut Question of Sport London!

The KidsOut Question of Sport London raised over £51,000 on Thursday 4th May 2017, to help KidsOut provide Fun & Happiness to disadvantaged children! 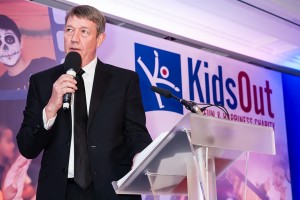 Over 300 people attended the black-tie dinner at the Royal Lancaster Hotel, which was hosted by radio presenter Mike Osman, while football manager and former Arsenal star David O’Leary acted as quiz master.

KidsOut Chairman Helen Pitcher OBE delivered a speech at the beginning of the evening
about the services that KidsOut offer, and thanked the event committee for their fantastic support.  A mother from a local refuge spoke also about her personal experience of domestic violence, and the support that KidsOut offer to her and her children, which lead to a brilliant £4,891 being pledged in order to take local disadvantaged children on FunDays.

In addition to the main quiz, guests could 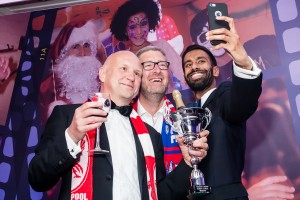 also participate in a raffle, silent and main auctions and higher and lower game, for which the prize was a £1,000 diamond!  There were some fantastic lots available from the silent auction, including a Chelsea Football Club t-shirt signed by the whole team and a Darth Vader mask signed by David Prowse, while the main auction featured prizes such as a Framed Brazil football shirt signed by Pele, and a signed Anthony Joshua boxing glove.  Artist Ben Mosely also did a live painting throughout the night, which sold for a fantastic £6,000 in the Main Auction!  All of these incredible prizes brought the auction totals to a collective £22,000!

KidsOut would like to thank the event committee, as this Question of Sport event would not have been possible without their support.  In particular, thank you to Neil Smith, who is the chair of the committee, but also to Nick and Ian Child, for their excellent support and fantastic prize donations.  The money raised at this event will be used as vital funds to supply FunDays and ToyBoxes in the local area, helping KidsOut to bring Fun and Happiness to disadvantaged children all over the United Kingdom.

The next KidsOut Question of Sport London will be held on the 10th May 2018, early bird bookings are now being taken – please contact our events team on 01525 243219.  Please see the London QoS page for more details.

Finally, thank you to photographer Paul Douglas for taking the official event photos throughout the evening.