For the fifth year, KidsOut will run the Trolley Dash donation drive on the last day of the Toy Fair. Last year’s show saw over 60 volunteers take to the show floor with empty shopping trolleys, collecting more than 4,000 toys kindly donated by exhibiting companies.

The toys collected at Toy Fair play a major role in KidsOut’s toy outreach programmes throughout the year. Supported by the huge collection from the Trolley Dash 2019, the charity was able to launch a brand-new service this year – the ‘Safe House Toy Box’ scheme.

Safe House Toy Box delivered toy boxes to more than 600 children in outreach and safe houses this year-to-date, increasing the charity’s outreach by 20%. The service is an extension to the charity’s existing Toy Box initiative, which distributes thousands of toy boxes to children in Women’s Aid refuges across the country. Both schemes combined have reached more than 3,000 children so far this year. 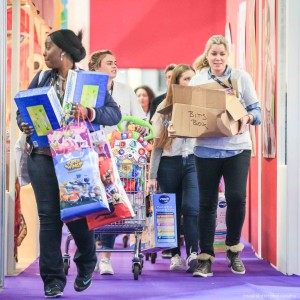 “KidsOut strives to bring fun and happiness to as many vulnerable young people as possible. Support from the Toy Industry through events like Toy Fair is essential in aiding KidsOut to expand its services and reach even more disadvantaged children around the UK,” said Gordon Moulds CBE DL, KidsOut CEO.

“We are always overwhelmed by the generosity and support from our exhibiting companies at Toy Fair,” commented Majen Immink, Director of Fairs and Special Events. “Thank you again for helping us to support this incredible charity, and their important work.”

Toy Fair takes place at Olympia, London from 21-23 January 2020. To register for a free pass to the show simply visit www.toyfair.co.uk.

Toy Fair is the UK’s largest dedicated toy, game and hobby trade exhibition taking place at Olympia London. The event takes place over three days at the end of January each year and plays host to hundreds of exhibitors, from start-ups to some of the biggest toy companies, launching thousands of new toy lines.

The British Toy & Hobby Association was established in 1944 to represent the interests of British toy manufacturers and to raise standards of practice in the industry. Today it has around 150 members ranging from international toy giants to small family-run businesses that together account for more than 80% of the UK’s legal branded toy market. Membership of the British Toy & Hobby Association shows the member’s commitment to adhere to the BTHA Code of Practice under the umbrella of the Lion Mark which includes assurances covering ethical and safe manufacture of toys, toy safety, a ban on counterfeit goods, an assurance to market responsibly, a commitment to improving sustainability and a desire to promote the value of all play through