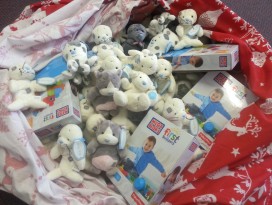 “It’s a nice thing to help people having a difficult time,” said Chris Montague. “Times are tough for a lot of people, and it’s something small that we can do to help.”

On the 4th of February, Bletchley Fire Station donated a large bag of toys to the KidsOut Toy Box service. A mixture of soft toys and children’s blocks, the toys were donated to the station in the lead up to Christmas. “My crew was due to work Christmas and Boxing Day so we decided to approach local businesses and ask for gifts to take to children in the hospital over Christmas,” explained Montague, Red Watch Commander. “A number of businesses were kind enough to help.”

The watch stopped by the hospital for Christmas, visiting children in the paediatric and maternity wards, walk-in centre and other areas of the hospital. “We were fairly popular for a couple hours,” said Montague. “There were a lot of extra children visiting their siblings, and we were even able to give some chocolates to the paramedics and doctors.”

With some gifts remaining after their Christmas visits to the hospital, Montague and his crew searched for a local charity that could send the toys to good homes. “One of my colleagues saw KidsOut advertised in a local magazine so we got in contact,” he said.

The team contacted KidsOut and arranged for the gifts to be incorporated into the charity’s Toy Box service, which send toys to children who have experience domestic violence. An estimated 1,600 toy boxes are expected to be sent out this financial year, and the KidsOut team is always looking for help to meet these children’s needs.

“The service is really very useful to us,” said a refuge worker in Wales. “When our families move out of refuge they literally have only what they brought with them when fleeing, often only the clothes on their back, and possibly the odd thing they could afford when in refuge. The toy boxes are such an important part to help the children settle into their permanent home.” 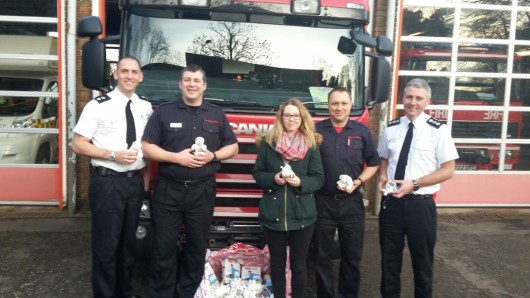