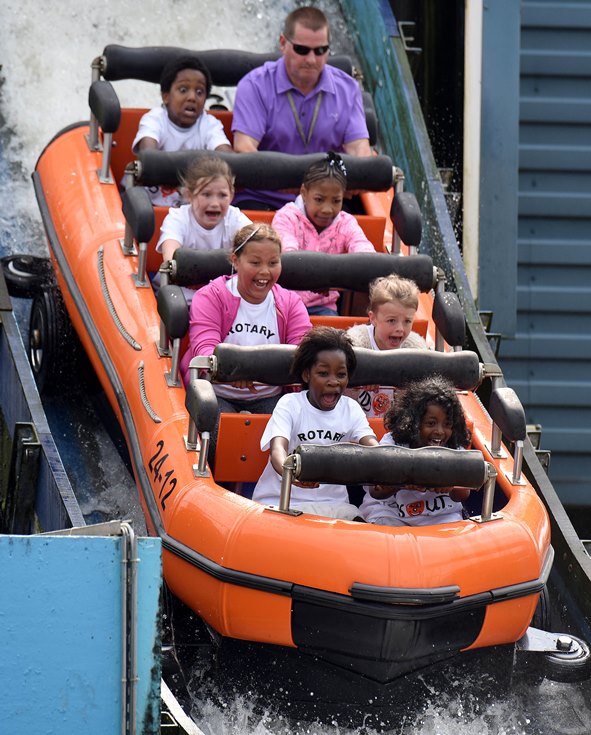 On the 8th of June 2016 KidsOut teamed up with Rotary International in Great Britain and Ireland to host the largest ever Rotary KidsOut Day.

Engaging more than 600 Rotary clubs around the UK, KidsOut’s 26th annual National Day Out took more than 29,000 disadvantaged and disabled children across the country on a fun day. Children of all ages visited theme parks, the seaside, zoos and other attractions with their carers, often for the first time in their lives.

Starting with humble beginnings, the first Rotary KidsOut Day took place in 1990 when 200 children with disabilities visited Thorpe Park. Since then the National Day Out has grown in size almost every year, expanding across the country.

Eliciting the help of over 10,000 Rotarians and corporate volunteers, the 2016 National Day Out was the largest in KidsOut’s history, overtaking the previous 2007 record of 28,558 children having a fun day. Groups varied dramatically in size and location, with Drayton Manor alone hosting close to 5,000 children.

Shutting to the public for the entire day, Drayton Manor gave KidsOut guests exclusive access to the entire theme park and children could also look forward to a free ice cream. KidsOut CEO Gordon Moulds attended the event at Drayton, helping greet and register groups in the morning. “We had a spectacular day,” he said. “Although closed to the public, the park was overrun with excited children and happy faces, all from KidsOut.”

Drayton Manor has participated in the special day for over 20 years, with its CEO Colin Bryan acting as KidsOut patron. “This event holds a really special place in our hearts and we look forward to it every single year,” he said. “It means a lot to be able to provide these children with a memorable day out, especially as so many of them have never been to a theme park before. It’s fantastic to see the smiles on all their faces and we’re honoured to be a part of this great initiative.”

“The kids had a really good time at the zoo. There was a lion mascot greeting them as they came in through the gates, and a lot of guided tours throughout the day,” said Suzanne Taylor, KidsOut Assistant Fundraising Executive who helped at Whipsnade. “I saw a talk with the sea lions and the keepers were really good at engaging the children. The sea lions were actually quite naughty, but the kids were loving it.”

“About ten local Rotary clubs put on a day at the Aldershot Rugby Training Ground, with face painting, petting zoo animals, a bouncy castle, fairground rides, giant inflatable slides, circus skills, a disco, a balloon race, a barbecue, candyfloss, a fire engine, ambulance and police car, and much more,” said Alice Capper, Assistant Fundraising Executive who went to Aldershot. “It was lovely to see so many children in KidsOut t-shirts having a break from their normal routine and enjoying some fun. The stalls and activities were all organised and run by Rotarians, and you could tell that everyone was really passionate about what they were doing.”

KidsOut’s National Day Out gives disabled and disadvantaged children the opportunity to have fun and enjoy what many other children may take for granted. This special day is vital to the lives and hopes of thousands of children across the UK and is only possible thanks to the thousands of Rotarians, volunteers and supporters who make it possible. KidsOut would like to thank all of the Rotary clubs and individuals that participated, with a special thanks to Don Carsley, the Rotary KidsOut Day coordinator.