Home > KidsOut News > ‘Battle of the Supermarkets: The Rematch’ raises over £700!

‘Battle of the Supermarkets: The Rematch’ raises over £700!

Last year was KidsOut’s inaugural Family Fun Day and Supermarket Football Match, and this year Morrisons succeeded in their mission to claim the title from Tesco!

Taking place on Sunday 6th August the two supermarkets once again went head to head in a 90 minute game.  The day was in aid of KidsOut, and all money raised will go towards providing fun and happiness to local disadvantaged children.

This year’s match was played in memory of Jamie Parker, a local young man who very sadly recently passed away.  Jamie worked at Tesco and was a very keen football fan, so all of the Tesco players marked their t-shirt with the name ‘Parker’ on the back to pay tribute to Jamie.  Jamie’s parents also donated the ‘Jamie Parker Memorial Shield’, which was awarded to the winning team this year and will be awarded to the winning team for each game in the future.

On the day from 3-5pm visitors could spectate a mini-match with two local youth teams from Leighton Buzzard, expertly lead by Jo Martindale.  They could also treat themselves to the offerings from the volunteer-run barbecue throughout the day, with the food kindly donated by both Tesco and Morrisons.

There was also many fantastic prizes up for grabs through the raffle, which were kindly donated by both Tesco and Morrisons in addition to local businesses.  Huge thanks to all businesses and companies that donated prizes!

The football match kicked off at 5pm, following a Jazzercise warm up run once again by Keri Donnellan.  Tesco fought valiantly to cling onto their title, but at the conclusion of the match Morrisons reigned victors, finally winning the match with a score of 3-2.

“A big thank you to both Tesco and Morrisons who made the football match for Kidsout such a success. Special thank you to Wendy Parker for providing the Parker Memorial Shield in tribute to her football mad son Jamie Parker.

Morrisons won this year, but which supermarket will have their name on the shield next year?

I chose Kidsout as it’s a fantastic non-profit charity, who give children that have nothing a reason to smile, and Morrisons love to ‘raise a smile’. “

Huge thanks go to Katharine Smith from Morrisons, Andy Taylor and his team from Tesco and Andrena Carden-White from Bee Local for helping KidsOut to organise this event. Without your input and help this event would not have been possible.  The event raised over £700 and helped to raise vital awareness of the charity and the work they do in the local area.  Thank you to all involved! 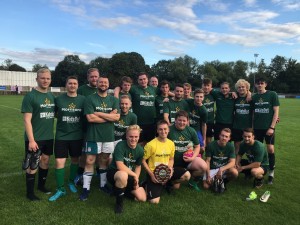 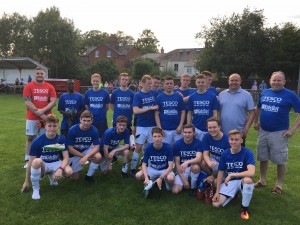