The KidsOut Question of Sport Event held at Elland Road, Leeds on 26th March has broken all previous records for an event of this type by raising over £96,000 for the charity.  The Event, co-hosted by comedian Pete Emmett and Bradford Bulls CEO and former New Zealand Rugby League player Robbie Hunter-Paul, was attended by almost 850 guests.  Our thanks go to the amazing generosity of the Yorkshire business community and to so many sporting icons from football, rugby league and union present and other local celebrities who gave of their time to support KidsOut. 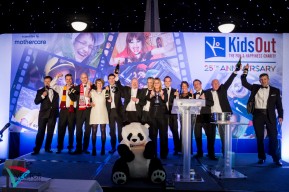 As usual there was an interactive Question of Sport quiz running throughout the evening, plus other more audience-participation style competitions such as higher-and-lower.  The eventual winners of the quiz were SRC Consulting for the Champions League with the Europa League won by Gordons LLP: congratulations to both teams and we hope to see you return to defend your titles next year.  The auction saw some fantastic prizes, many of which were donated kindly by local companies, raise over £20,000: a limited edition Picasso lithograph sold for £2,300.  The monies raised will go to help fund KidsOut’s activities in the Yorkshire area by funding toy boxes for local children who had been rescued from domestic abuse or violence and to allow KidsOut to give a special “day out” to disadvantaged children in the region. 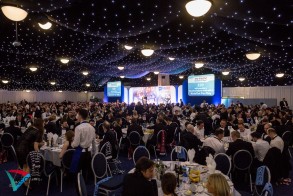 In addition to the outstanding entertainment, the night also saw two special presentations by Helen Pitcher, the KidsOut Chairman of Trustees, to Ian Ruthven, local committee chairman, and to Lisa Gamble. Both received a “KidsOut Outstanding Contribution Award” in recognition of their support for the charity.  The Trustees make only three such awards each year and for two to be presented in one region reflects not only the sterling efforts of Ian and Lisa but also the rest of the Leeds Committee.  Our thanks also go to Nessa Asset Management, the principal sponsor for the event, and to all of the other corporate sponsors for their help in making the event such a resounding success.

We are already planning for the event next year and we are pleased to confirm that we will return to Elland Road.  We hope that this will become a standing fixture in the local calendar and the date will be revealed shortly.  Please sign up for our Newsletter and watch the KidsOut website for the announcement.

Given the success this year, our target must be to breach the £100,000 barrier next time around!