A Question of Trivia dazzles Cardiff

KidsOut hosted its first ever Question of Trivia in the stunning City Hall in Cardiff on the 25th September 2015. Attended by more than 350 people, the black-tie event tested guests’ general knowledge while they enjoyed drinks and shared selfies on the KidsOut Twitter feed. Mike Osman acted as compere, keeping the festivities rolling and leading the evening’s auction, and formed Wales and Cardiff Blues Rugby Professional Rhys Williams was the night’s quiz master. Emma Batchelor sang at the beginning of the event and again after dinner during a moving video of the charity’s efforts for children across Britain.

Raising a total of more than £32,000, the evening saw attendees pledge £6000 alone, in addition to funds raised in the silent and live auctions.

An ardent supporter of KidsOut over the past few years, Designer Contracts was granted a special award for its dedication to the charity and commitment to helping disadvantaged children.

With immense gratitude to all its supporters, KidsOut would like to give a special thanks to the Cardiff Committee members and chair David Kelland for organising and hosting the event, as well as all the Cardiff sponsors for their invaluable contributions. 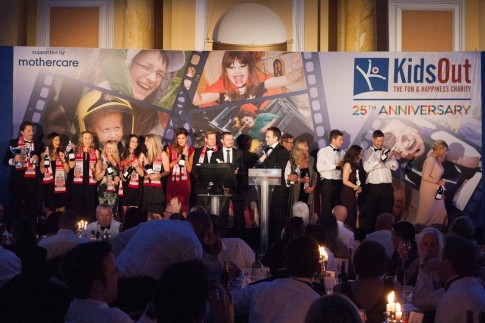