2017 fundraising off to a flying start in Leeds

Attended by over 80 companies and sponsored by Burflex Scaffolding, the KidsOut Leeds Question of Sport 2017 took place on 2nd March, once again at Elland Road Stadium, home of Leeds United.

Breaking fundraising records for the fourth year in a row, this was also the most successful KidsOut event in terms of number of attendees, with 852 local business people contributing to a phenomenal £112,327 raised!

Sports broadcaster from the region Adam Pope acted as host for the evening, with cricket legends Darren Gough and Ronnie Irani taking on the roles of quiz masters for the sporting themed quiz. 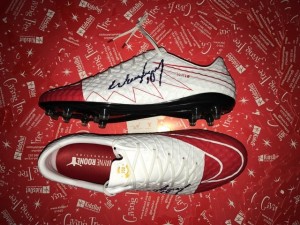 The black-tie evening opened with a champagne reception followed by a three-course meal served with wine. In addition to the main Question of Sport quiz, guests could participate in a raffle, play Spot the Ball and Higher & Lower, and bid on exceptional auction prizes, including a Milan Football Experience which sold for £1,300 and Mohammed Ali signed gloves and Wayne Rooney signed football boots which sold for £2,000 each.

One of the evening’s highlights featured a phenomenal £15,000 being pledged by guests to take disadvantaged children, including those in refuge, in the Leeds area on a Fun Day out. Fun Days can help children develop self-esteem and confidence, as well as enjoy new life experiences and meet others living in similar situations to themselves, helping them to feel less isolated. Several guests also pledged to run the Leeds Half Marathon in 2018 in aid of KidsOut, sponsorship from which will contribute to even more children’s services provided in Leeds.

Gordon Moulds, KidsOut CEO, said: “We cannot thank the Leeds committee enough – this has been a massively successful event for KidsOut. All the money raised will go towards continuing our services, namely Fun Days and Toy Boxes, for vulnerable children in the Leeds area.”

KidsOut would like to thank the Leeds Committee, in particular Ian Ruthven and Lisa Gamble for their ongoing hard work, and all the companies that attended to make this event a success. Special thanks must also go to the event’s main sponsor, Burflex Scaffolding, and all prize donors.